MANILA, Philippines — An estimated 12.2 million adult Filipinos were unemployed during the first quarter of the year, the latest survey by the Social Weather Stations (SWS) released on Thursday showed.

The pollster, however, noted that the latest figure is still 8.3 percent higher than the pre-pandemic level of 17.5 percent in December 2019. 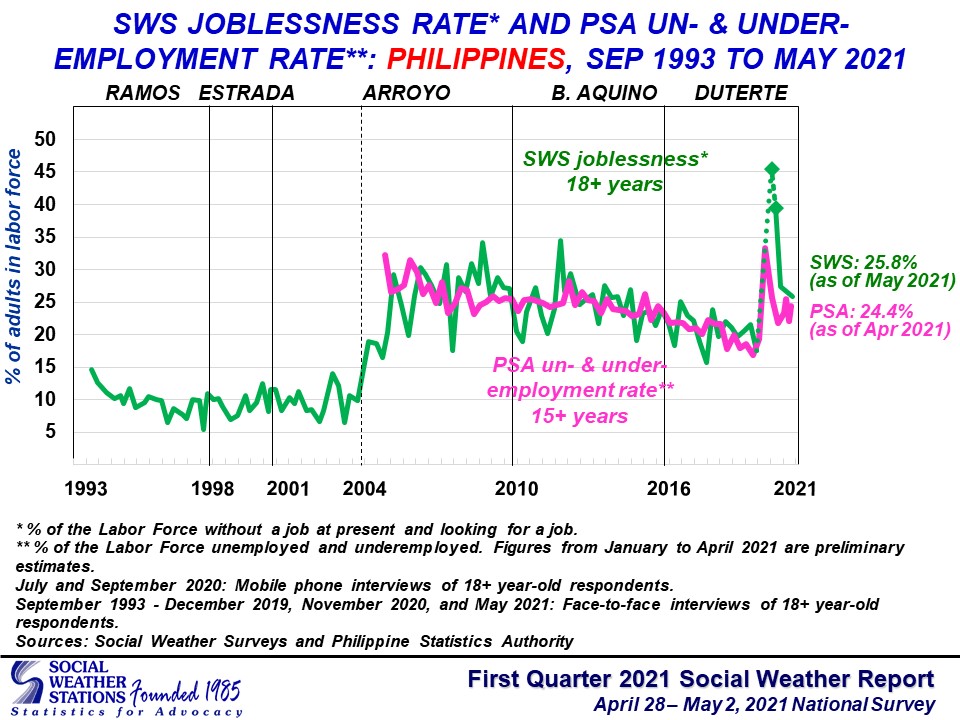 The SWS defines the labor force as adults aged 18 and above, presently with a job plus those looking for a job.

The jobless, on the other hand, consist of those who voluntarily left their old jobs, are seeking jobs for the first time or lost their jobs due to economic circumstances beyond their control.

The SWS survey revealed that joblessness declined in Metro Manila and Balance Luzon but rose in the Visayas and Mindanao. In Visayas, joblessness rose to 28.7 percent in May 2021 from 19.1 percent in November last year. It also increased in Mindanao, from 17 percent to 23 percent in the same period.

“The 1.5-point decline in the national joblessness rate was due to decreases of 9 points in Balance Luzon and 7 points in Metro Manila, offset by increases of 10 points in the Visayas and 6 points in Mindanao,” the SWS said.

The May 2021 survey also found the Labor Force Participation Rate, or the number of adults in the labor force, at 67 percent, or an estimated 47.5 million Filipinos.

The SWS survey was conducted from April 28 to May 2 using face-to-face interviews of 1,200 respondents.

A recent survey of the Social Weather Stations (SWS) shows that at least 4.2 million Filipino families experienced involuntary hunger over the past three months as the hunger rate in the Philippines increased.

The SWS said results of the poll conducted from April 28 to May 2 showed that 16.8% of Filipino families experienced hunger due to lack of food to eat at least once in the past three months.

The survey said that out of the 16.8% Hunger rate in May, an estimated 3.6 million families or 14.1% experienced Moderate Hunger, while around 674,000 families or 2.7% experienced Severe Hunger in the past three months.

According to the SWS, the First Quarter 2021 survey was conducted from April 28 to May 2, 2021, using face-to-face interviews of 1,200 adults (18 years old and above) nationwide: 300 each in Metro Manila, Balance Luzon, the Visayas, and Mindanao.

Its sampling margin of error in national coverage is at ±3%, and ±6% for Balance Luzon, Metro Manila, the Visayas, and Mindanao.

The area estimates were weighted by the Philippine Statistics Authority medium-population projections for 2021 to obtain the national estimates, the survey firm said.

It added that the survey items were non-commissioned and were included on the SWS’s initiative as part of its public service. —/mbmf

MANILA, Philippines — The recent Social Weather Stations (SWS) survey showed that 62% of adult Filipinos believe their quality of life got worse off in the past 12 months.

The survey conducted from November 21 to 25 revealed that 24% of Filipinos said their lives remain unchanged while 14% believed it got better.

It is lower compared to the September 2020 poll results where 82% of adult Filipinos said their quality of life worsened, 11% said it stayed the same, and 6% said it got better.

The SWS poll was conducted using face-to-face interviews of 1,800 respondents, aged 18 and above in balance Luzon, Visayas, Mindanao and Metro Manila.

The exact survey question is as follows: Kung ikukumpara ang uri ng inyong kasalukuyang pamumuhay sa nakaraang 12 buwan, masasabi ba ninyo na ang uri ng inyong pamumuhay ay ‘Mas mabuti kaysa noon’, ‘Kapareho ng dati’, o ‘Mas masama kaysa noon’? [comparing your quality of life these days to how it was 12 months ago, would you say that ‘Your quality of life is better now than before’, ‘Same as before’, or ‘Worse now than before’?] AAC

MANILA, Philippines – The latest poll of the Social Weather Stations (SWS) reveals that 82 percent of adult Filipinos believed their lives have worsened in the last 12 months, termed in the survey as “losers”.

Meanwhile, 11 percent said their lives remained unchanged and the other six percent or the so-called ‘gainers’ believed it got better.

This was based on the recent National Mobile Phone Survey that the SWS conducted from September 17 to 20, 2020.

The result net gainers score in September 2020 is -76 percent which is considered ‘catastrophic’ by the polling firm.

The September 2020 score joins the worst trends in survey history of SWS and the worsening of life quality is experienced in all areas of the country.

For its part, the Palace said it is saddened by the outcome of the survey which is brought by the COVID-19 pandemic.

However, Presidential Spokesperson Harry Roque expects the quality of life of Filipinos to improve as soon as the COVID-19 vaccine becomes available.

“Tingin ko naman po from now on, bubuti na po ang buhay natin [I believe that from now on, our life will improve],” he said.

“Papalabas na po ang bakuna at natututo na rin tayong mabuhay bagaman nandiyan po ang COVID-19 [The vaccine will be out soon and we have learned to live even with COVID-19],” he said. –MNP (with reports from Rosalie Coz)