BEIJING, Dec. 8, 2021  /PRNewswire/ — Under the aegis of the National Radio and Television Administration of China and the People’s Government of Beijing Municipality, 2021 The 3rd Beijing International Public Service Advertisement Conference themed Shedding A Spotlight On Public Service Communications was held in Beijing Shougang Park on December 8, 2021. The event was co-hosted by the Publicity Department of the Beijing Municipal Committee of the CPC and Beijing Municipal Radio and Television Bureau, with CAA Advertising Information and Culture Communication Co., Ltd and Beijing Radio & Television Station (BRTV) acting as co-organizers. 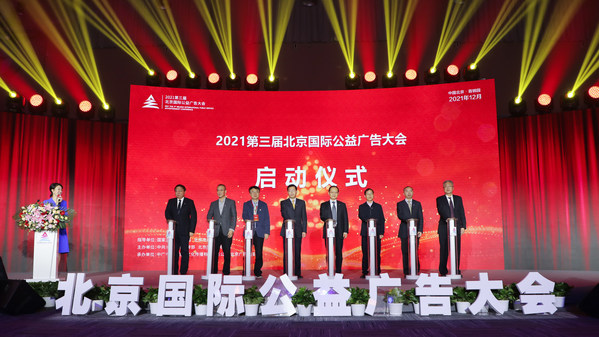 Held in an “online+” format, the event brought together classic advertisements and young talents from the advertising sector while promoting key projects and international collaborations in the sector via a cloud-based conference and exhibition that highlights the Beijing style, unique Chinese characteristics and international perspectives, with the aim of creating an internationally recognized event.

The conference included multiple noteworthy highlights, including the public issuance of the Proposal for Regulating the Celebrity Endorsement Market And Jointly Building A Culture and Entertainment Ecosystem, the unveiling and signing ceremony of the Beijing Public Service Advertisements International Communication Center, a facility jointly established by the Beijing Municipal Radio and Television Bureau and the Communication University of China, as well as the release of the 2021 Global Public Service Advertisements Development Report Framework.

Launched in 2019, Beijing International Public Service Advertisement Conference has been held consecutively for the last two years. Serving as a meeting place for the global public service advertisements sector, the event includes platforms for the demonstration of cultural achievements, innovation in artistic and literary commentary, discussions and exchanges between the sector’s thought leaders as well as access to relevant authoritative industry data. The conference is expected to further facilitate the growth of the international public service sector as well as serve as a showcase for public service advertisements in Beijing.