Sotto had expressed “strong reservations” when he signed the bill for the 2019 national budget on March 26, maintaining that the P75-billion worth of projects under the Department of Public Works and Highways (DPWH)
local infrastructure program funded through the “internal realignments” were “unconstitutional.” He also expressed hope that President Rodrigo Duterte will consider his request to veto the questionable provisions in the bill, specifically the alleged pork barrel insertions.

In a statement accompanying the letter he sent to Executive Secretary Salvador Medialdea and acting Budget Chief Janet Abuel, Andaya asked Malacañang and the Department of Budget and Management (DBM) to assail Sotto’s conditional signing of the bill.

Andaya said Sotto’s “unwarranted” move was ill-advised by his lawyer and that there is no such thing as “conditional signing of an enrolled bill.”

“The Senate cannot clothe his signature to the 2019 General Appropriations Bills with ambivalence or dissent,” he said

“The letter he sent to the President expressing his “strong reservations” as annotation in the 2016 National Budget enrolled bill has no legal basis. It is just a personal request, which the President may or may not take heed,” he said.

Andaya also stressed that signing an enrolled copy of the national budget is a legal act so “the imprimatur of the Senate President on the enrolled bill cannot be diminished by his ‘strong reservations,’ which are completely unwarranted.”

“For one, the realignments he cited were adjustments authorized by no less than the Bicameral Conference Committee, which was approved and signed by the conferees from both chamber,” Andaya said.

Andaya also pointed out that the Omnibus Motion had been included in the previous bicameral reports for institutionalized realignments pursuant to the ratified bicameral report.

“We also maintain that the realignments which the Senate also made, are fully constitutional as part of the budgetary process, and there is no constitutional provision which has been violated, as none was cited by the Senate President,” he said.

But Senate Minority Leader Franklin Drilon has a different interpretation on the issue, stressing that inserting realignments after the budget has been ratified is a different matter.

“It can’t be interpreted that suddenly you insert and realign items in the budget, no,” Drilon said.

He also supports Sotto’s move to express reservations on the 2019 budget bill due to questionable provisions.

“The President has no choice but to veto, because the Senate President said that portion of the bill was not validly passed,” he said.

Sotto, meanwhile, said the budget approval is now up to President Duterte.

“At the end of the day, the Senate exercised its power to scrutinize and challenge what is spurious in the budget. It also proves that the Senate is still and will remain independent. The Senate will let the President decide on the submitted budget,” Sotto said in a statement on Wednesday.

House Speaker Gloria Macapagal-Arroyo, for her part, expressed confidence that the 2019 budget will be signed soon when Duterte has completed the line-item vetoes.

Malacañang earlier assured that they will thoroughly review the bill prior to Duterte’s signing. – Robie de Guzman (with details from Nel Maribojoc) MANILA, Philippines – President Rodrigo Duterte and Senate President Vicente Sotto III are top-performing officials in the country, according to the latest survey released by Pulse Asia.

The survey, conducted from December 1 to 6, 2021, showed that 72% of the respondents approved of Duterte’s performance. This is higher than the 64%approval rating he got in the survey done in September. 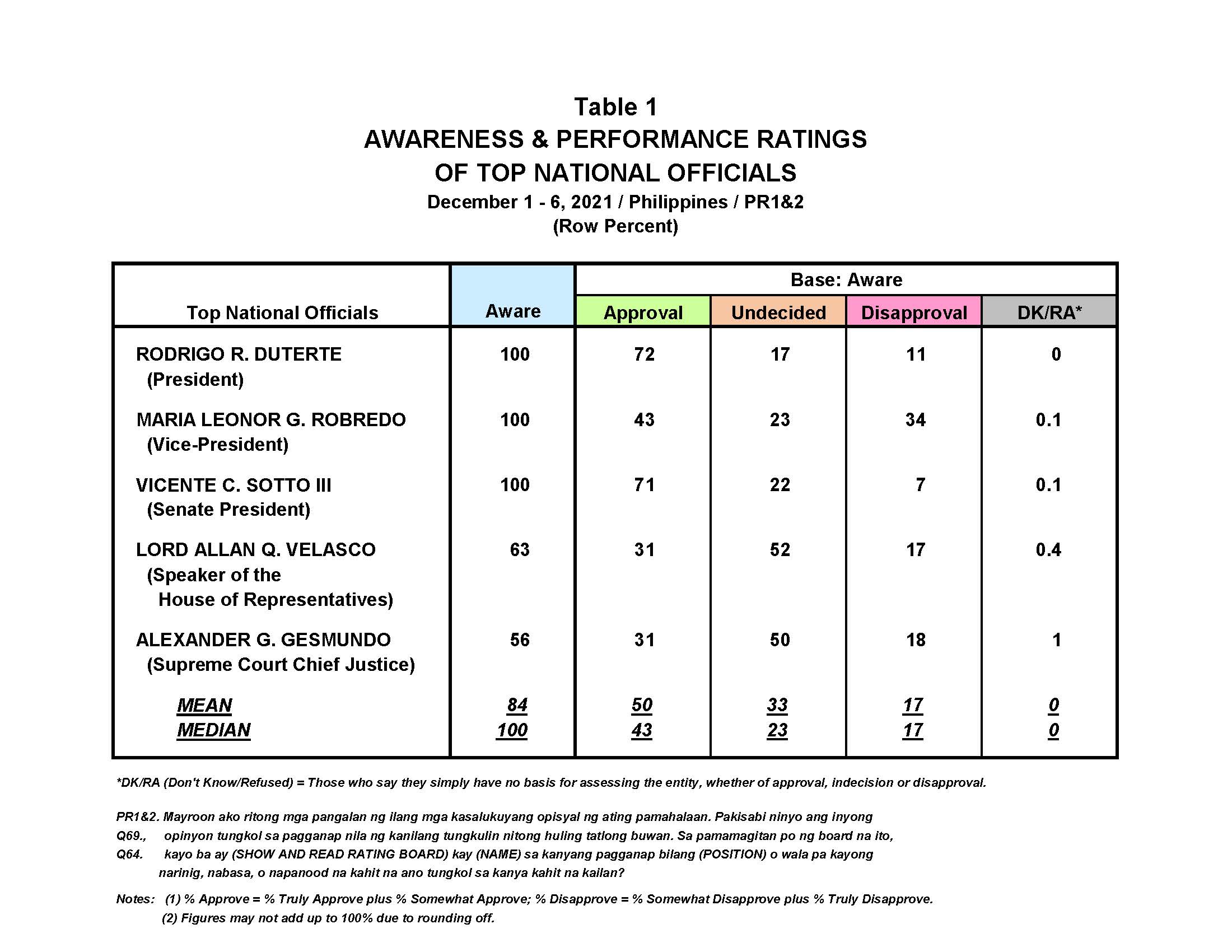 Vice President Leni Robredo got 43% approval in her performance, which is lower than the 48% rating she got in the September survey. 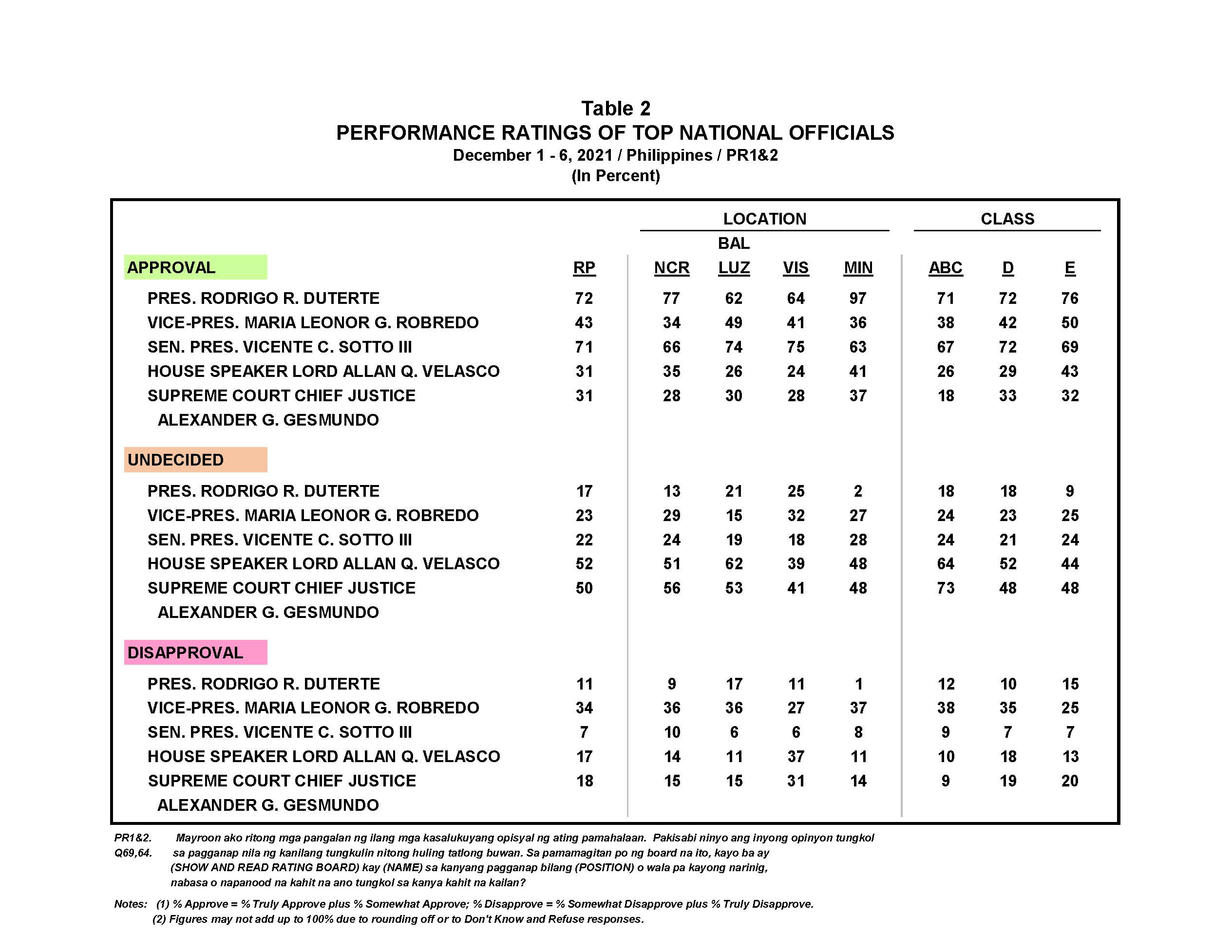 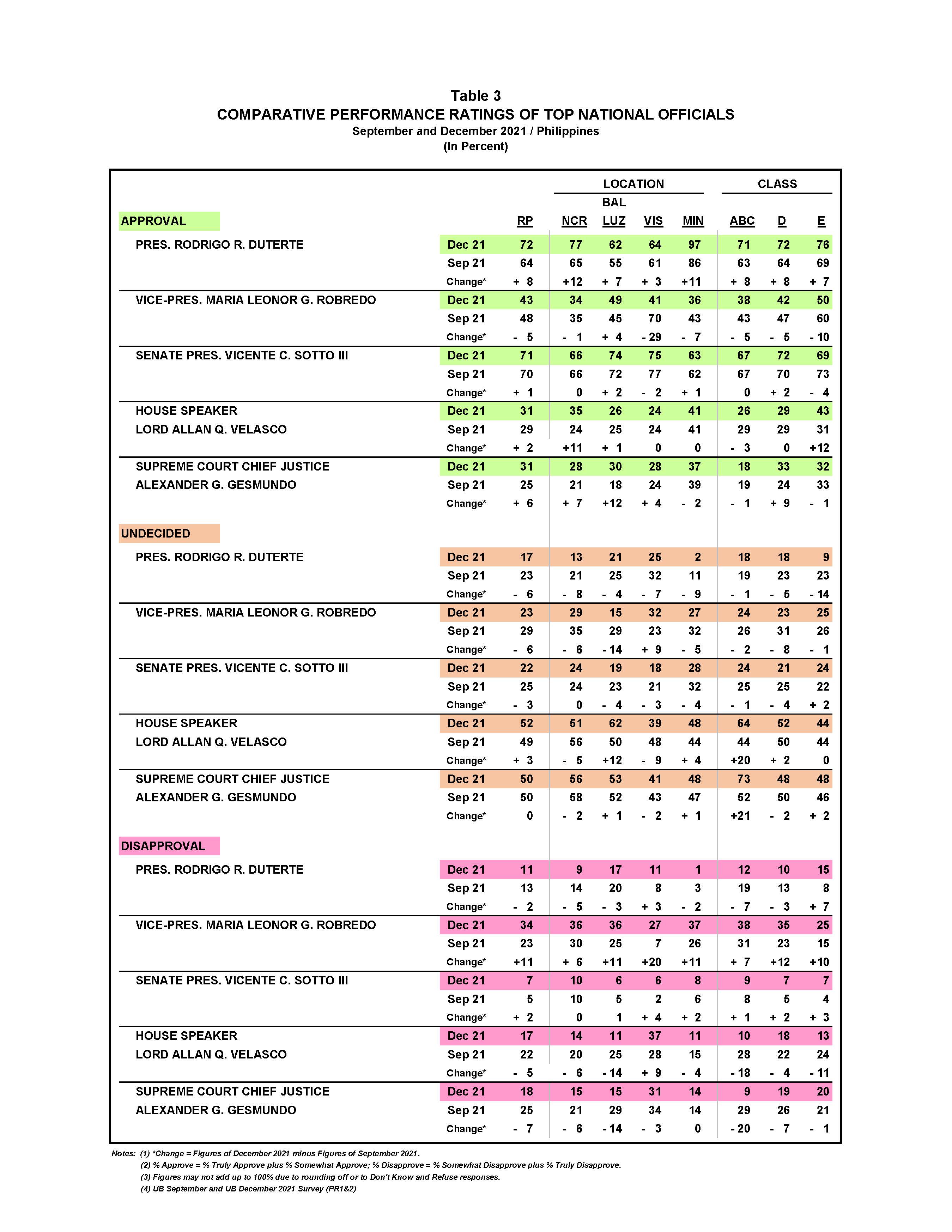 Pulse Asia said the nationwide survey was based on a sample of 2,400 representative adults 18 years old and above.

The pollster said news related to the COVID-19 pandemic and the May 2022 elections dominated the headlines when the survey was held.

These issues include the Davao City Mayor Sara Duterte’s withdrawal of her reelection bid to run for vice president in tandem with presidential aspirant Ferdinand “Bongbong” Marcos Jr., Duterte’s allegations that a presidential aspirant is a cocaine user, the declining COVID-19 cases and widening vaccination coverage in the Philippines, the filing of petitions for disqualification for Marcos’ presidential run, and the imposition of travel ban on several nations that detected the Omicron variant. Lacson and Sotto filed their COCs past 11 a.m.

This is Lacson’s second try at seeking the presidential post after a failed bid nearly two decades ago.

Should they win the election next year, the lawmakers said they will intensify efforts against corruption and illegal drugs and ensure proper balance in the use of national budget.

“If we hold the reigns of the executive department we will able to execute it well. We know the ails, we know the solutions, balance the budget, budget reform, reign the money to the people, enhance the fight in illegal drugs by more emphasis on demand with reduction strategy,” Sotto said.

Lacson is running under the Demokratikong Reporma Party while Sotto is under the Nationalist People’s Coalition. Both lawmakers sit as chairmen of their respective parties.